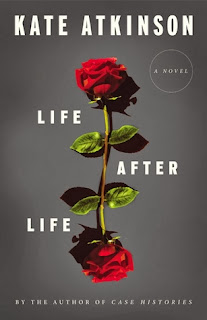 "What if we had a chance to do it again and again, until we finally did get it right? Wouldn't that be wonderful?"

Life After Life (2013) by Kate Atkinson is another book that I heard about through Cannonball. The reviews were positive enough to draw me in, although the premise reminded me of Groundhog Day and I worried how the book would work without becoming tedious. I shouldn't have worried. The above quote isn't an accurate depiction of what occurs, and I found a surprisingly thought-provoking and moving story instead.

Ursula Todd was born in a village in England in 1910. She immediately dies, choked by the umbilical cord. And she is born again. This continues throughout the book as different versions and variations of Ursula's life are examined through her coming of age and two world wars. The misconception I had coming into this book was that Ursula remembered her past lives and consciously changed her actions accordingly. Instead, although Ursula feels premonitions of danger and deja vu, sometimes causing a change in her behavior, it is more an examination of the many possible variations of one person's life. The focus is not on the reincarnation aspect. In fact, it seems that the reincarnation is only a tool to more fully explore Ursula, her family and her acquaintances--to see all the possibilities of their personalities. Ursula's mother's variable temperament is seen by how she reacts to Ursula's life while the steady love of Ursula's father is constant no matter the circumstances.

It took me a little while to get into this book. I was distracted at first by the premise and how it would work, but it wasn't long before I was fully invested in Ursula's life. Ursula's first foray into adulthood was tragic, and I desperately looked forward to another chance for her. I was impressed by Atkinson's storytelling and her ability to keep the plot and characters straight and memorable.

As the plot continues, the clear lines of cause and effect start to blur as Ursula's life jumps from England to Germany and back again. I was fascinated by the idea that such tiny circumstances could demonstrably change someone's life so drastically, and I was emotionally involved throughout the story.

However, if you think too hard about the premise, it doesn't quite work. What happens to all of the other characters that live their lives over and over again along with Ursula? They don't seem to be having deja vu, although they are still capable of changing their behavior. Are these parallel worlds or does the world stop and start over again? In the end, I think it's best to just accept the premise and enjoy the lives and characters that Atkinson presents to us.

***SPOILERS***
The book begins with Ursula walking into a cafe in Germany and shooting Hitler. This was the only aspect of the story where, although I was interested, I was not fully involved. Most of the book zeroes in on the life of one small person and her family and how the world impacts her. Suddenly she is in Germany and poised to have an effect on world history that is hard to contemplate. It felt too far-fetched, and if Atkinson really wanted to go there, I felt a little cheated that she didn't follow it through. Was Ursula immediately killed, thus ending that particular reality? Does a world without Hitler exist somewhere? Also, that was the one instance in the novel where Ursula must have been able to clearly remember enough details of her former lives to go back and consciously change history.

I was also a little disappointed in the end. I kept reading and reading, hoping for a "final version" of Ursula's life. Yet her life continued to be random, with some things getting better and some things getting worse. And then the novel ends.
Posted by Book Blogger at 6:42 PM

I have been meaning to read this one for ages, and your review encourages me to make more of an effort! It's had such wonderful reviews but I think yours has given me the best handle on what to expect.
Click here for Lake Clark Alaska Bear Viewing Tours