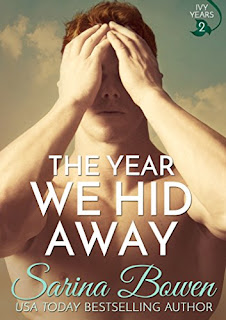 I was surprised by how much I enjoyed the first book of Sarina Bowen's Ivy League Series: The Year We Fell Down. It was emotionally engaging and very fun to read. Emmalita was kind enough to lend me the next two books in the series, which I managed to read in quick succession (although I am only now getting around to reviewing them.)

The Year We Hid Away (2014) brings back Bridger, the partier and player, from the first book. But this year Bridger has more responsibilities than hockey and classes. When his drug addict mother's home becomes too dangerous for his much younger sister, Bridger takes her out and hides her in his dorm room. Pulling away from his friends and quitting hockey, Bridger only has time for his classes and taking care of his sister...until he meets Scarlet.

Scarlet is in her own desperate situation. Escaping from the scandal of the decade, Scarlet has recently changed her name and literally run away from home for her Freshman year of college. Her father, a famous former hockey player and current coach, has been accused of sexually assaulting children in a story line reminiscent of Jerry Sandusky. Her friends treat her like a pariah and news trucks haunt her front yard. Her parents want her to stand solidly behind her father. However, Scarlet wonders if her father is guilty and if there was any way she could have known.

I very much enjoyed the relationship between Scarlet and Bridger, and the book was consistently interesting and entertaining, It never occurred to me to think much about Sandusky's family when the Penn State scandal hit, so Scarlet's perspective was both thought provoking and sad. And Bridger was a very likable character with a lot on his plate. However, I liked The Year We Fell Down a little better. My main problem with The Year We Hid Away were a number of instances that felt unrealistic enough that they took me out of the story.

***SPOILERS***
First, I could not believe that Bridger would be able to hide his sister in a dorm room. She biked there and walked in with him every day. She parked her little pink bicycle next to her brother's on the bike rack. Dorms are so busy and communal, it just wouldn't be feasible. Second, I had a hard time believing that Scarlet would be assaulted by her father's lawyer's henchman. I can't believe an attorney would bully her client's daughter in that way. If that had gotten out, she would have been disbarred. It didn't make sense. In fact, the entire relationship between Scarlet and her parents felt unreal. They were so evil and unlikable. It would have made for a more interesting, and more morally ambiguous story, if they had been more sympathetic.

Also, a couple of scenes just rubbed me the wrong way. I'm a sucker for a strong, protective hero, but when Bridger saves Scarlet from a creeper at the bar, it felt too much like a cliche. Also, the busy line outside of the bar somehow immediately transformed to a dark, deserted, and dangerous place when Scarlet needed to be put in peril. Finally, it bothered me that Scarlet had no problems kicking her parents out of her life while still counting on their money for tuition. I don't think you can have it both ways, and if you're relying on them for basically your entire livelihood, you are not free of them. And why wouldn't her horrible parents hold her tuition (for as long as they're able to pay it) over her head?
Posted by Book Blogger at 9:26 PM