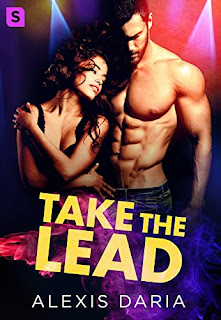 Dancing With the Stars has often been a guilty pleasure of mine. I haven't seen it in a while, but there have been seasons where I painstakingly found all the dances on Youtube (I don't have cable) to follow what was happening. So when I heard there was a romance novel that was based on the show, I was ready to give it a try. I must have seen a Cannonball review of Take the Lead (2017) by Alexis Daria, although I can't remember for sure now. Initially I would have preferred for the non-dancer to be a woman and the professional dancer to be male, just for my own wish fulfillment purposes, but I enjoyed what Daria did with this story.

Gina Morales is a professional dancer on her fifth season of The Dance Off (Dancing With the Stars). She desperately wants to win, and is put under even more pressure when her producer tells her that she is off the show if she doesn't make the finals. Gina's celebrity dance partner is Stone Nielson. Stone is a reluctant participant on his family's reality show "Living Wild." The Nielson family make a living off the land in Alaska. He agrees to do the show in order to pay for his mother's recent hip surgery, but he has little interest in Los Angeles or the show and is eager to get back to Alaska.

Gina and Stone are instantly attracted to each other, but neither one is looking for a relationship. Fortunately for them, being dance partners requires a lot of time and contact, and their relationship grows. I liked Stone as a romantic hero. He was very sexy and very nice, and I appreciated him. I also enjoyed the behind-the-scenes look at the often fake reality shows. It was both interesting and funny.

However, I didn't always buy all the drama keeping the two main characters apart. Gina wanted to be known for her dancing and not being the stereotypical "sexy Latina," so she didn't want to exploit any relationship between her and Stone. That's fair, but that show is all about selling sex. It's kind of odd to draw the line right there. Then Stone saw a camera taking a picture of them kissing, and, oh, the drama, and it got a little old. Gina was all over the place. At one point she's grabbing Stone's ass on camera and the next second she won't even look at him. I think I would have preferred a more straightforward slow burn. Despite these minor issues, I enjoyed the book and will definitely be looking for more in this series.
Posted by Book Blogger at 9:11 PM