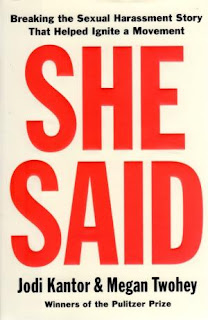 Wow, I did not think I was going to delve into this topic as much as I have. I recently picked up and read Catch and Kill on a whim when I saw it at the library. Even though I already knew Weinstein was an asshole, I could not stop reading it. So, when I finished, I decided to read She Said (2019) by Jodi Kantor and Megan Twohey. I figured it was only fair to read the book by the reporters who were first to break the story. I didn't want to discount them just because they don't have a famous name. And I was very impressed. Both books were very interesting and enlightening, and I would definitely recommend reading both of them.

Because I read She Said after Catch and Kill, I could not help but compare the two books. Obviously, they are both about the investigation into the long lasting sexual harassment and assault perpetrated by Harvey Weinstein. All of the reporters had issues with getting sources to trust them and go on the record. All of the reporters dealt with the power and influence of Weinstein as they tried to find and tell the story. However, the focus of the books is surprisingly different. It's fascinating to see how the same basic story came about in such different ways.

Farrow's book is more personal. He talks a lot about how stressful it was for him to have people following him and his bosses working against him. Much of his story is the fight at NBC to get the story and get it published. In addition, he discusses how his sister's experiences and opinion influenced him as he worked. He even mentioned that Weinstein called Woody Allen (Farrow's father) for advise on how to deal with "these kinds of allegations." It boggles the mind.

Kantor and Twohey don't bring as much of their personal life into it, but it was especially fascinating to see the striking difference between the editors at NBC and The New York Times. While Farrow was running into a brick wall everywhere he turned, there was absolutely nothing like that at The Times. Weinstein tried to contact and influence the NYT editor, and he simply did not take Weinstein's calls. It was refreshing and made me proud of my subscription to The New York Times. It also made NBC look even worse. I'm looking at you, Noah Oppenheim.

Another difference is that She Said took a slightly more broad approach. Kantor and Twohey put Weinstein into perspective and discussed it's influence on the #MeToo movement. They begin the book with the allegations against Trump before the election, and they end the book with Christine Blasey Ford's allegations against Brett Kavanaugh. In the last chapter, the reporters invite a number of women they've reported on to get together and discuss their experiences.

Farrow's book started with Ambra Gutierrez and the case the NYPD had against Weinstein. He spent a lot of time trying to get the audio tape, and he goes into a lot of detail to explain how Weinstein eventually silenced Gutierrez. On the other side, Kantor and Twohey looked into Gutierrez but were told by a very unreliable source (Linda Farstein--who sold her soul to Weinstein) that there was no case there, and they didn't look into it further. Instead, their story began with Hollywood insiders like Gwyneth Paltrow and Lena Dunham giving the reporters tips and contact information.

Like Catch and Kill, there were a number of people--besides Weinstein, of course--who really irritated me. Lisa Bloom comes across very poorly in both books. A number of other people on Weinstein's payroll put money over morality, including Weinstein's attorney, David Boies. Linda Farstein was a former Manhattan sex crimes prosecutor who helped Weinstein get away with sexual assault and then didn't tell Kantor and Twohey that she worked for him.

I am very glad I stumbled upon Catch and Kill, which then led me to She Said. After not having much interest in a subject I thought I knew, I've learned so much. I would definitely recommend both of these books.