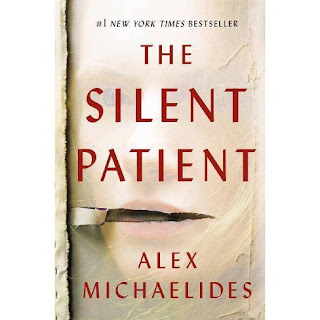 I remember seeing The Silent Patient (2019) by Alex Michaelides on some "best of 2019" list somewhere. The blurb sounded pretty intriguing. A successful artist and beautiful woman is found covered in blood in her home. Her husband has been shot and killed, but the woman has not and will not utter another word. It's pretty clear that she murdered her husband, but no one knows what really happened.The Silent Patient has 4.5 stars on Amazon, was voted best mystery of 2019 on Goodreads, and it's apparently being made into a movie. There was such high praise for this novel, that I expected something like Gone Girl. Unfortunately, I was disappointed. I did not like this book. The characters felt fake, their motivations did not make sense to me, and the plot was farfetched. I was frustrated at the characters as I read, and I was frustrated at the outcome when I was finished.

Theo Faber is a criminal psychotherapist. He is fascinated with Alicia, the woman who killed her husband and hasn't spoken for five years. He gets himself hired at the mental hospital where she has been placed. The therapist already in charge of Alicia's care is an old rival of Theo's. He acts belligerent and immature, I guess to create more tension in the novel.

Theo quickly goes past ethical boundaries with Alicia, talking with her friends and business relations as he tries to find out what happened. Chapters switch back and forth between Theo and Alicia at the mental hospital and Theo with his wife at home. At some point, Theo gets a hold of Alicia's diary, which gives him even more information.

***SPOILERS*** So, it turns out that the author was kind of tricking us because all of the scenes with Theo and his wife had actually happened in the past. Theo's wife had been cheating on him with Alicia's husband. Theo discovered his wife's betrayal and followed her lover (walking behind him and getting on three different buses without being noticed!) until he could figure out who he was.

Theo decided that he wanted "to awaken Alicia to the truth about her marriage." (314) So, instead of telling her that her husband was sleeping with his wife, he stalked her for a little bit, terrifying her. Then he broke into her home and tied her up to a chair, keeping her there for hours. When her husband got home, Theo tied him up as well, facing them away from each other. Then Theo told them that he would kill one of them, and the husband had to decide which one. At the last second, the husband said he didn't want to die, basically telling Theo to kill his wife. Theo shot into the ceiling instead, untied Alicia, and left. But when he left, Alicia shot her husband. Apparently Alicia bought into some old, Greek myth where a woman stopped speaking after her husband was willing to sacrifice her.

What Theo later discovered when he worked with Alicia at the mental hospital was that she'd had some very traumatic experiences as a child. Her father was an asshole. When her mother died, she overheard her father saying that it should have been Alicia who'd died. When Theo learned this, he said, "What your father said is tantamount to psychic murder. He killed you." (258) "He had committed psychic infanticide and he knew it." (256) Apparently this past experience is what caused Alicia to break and kill her husband. But psychic murder? What is he talking about. That sounds ridiculous.

Theo says in the book, "I had no idea about Alicia's history of instability. Had I known, I never would have pushed things so far." (314) Seriously? It was a good plan, otherwise? One of the problems with this book is that Theo would have to be a special kind of psychopath to be doing all this (and even worse behavior at the end). But the entire book is in his perspective and we don't see anything amiss until a little at the end. His character does not make any sense. ***END SPOILERS***

Another problem I had was Alicia's diary. I was actually looking forward to a different perspective, but it was written exactly like the rest of the book. It did not seem anything remotely like a diary entry. I tried to give it the benefit of the doubt because Alicia is an artist and she might be more descriptive, but it read nothing like a diary. For instance, when Alicia hears someone breaking into her house, and she thinks she's going to be killed, she writes in her diary, "He's trying to get in. I need to get out of here. I need to escape. Oh my God--I can hear him--He's inside. He's inside the house." (224) Maybe, if you think you're going to die and you're desperate to impart some information, you might scribble it down in these circumstances. But when she literally says that she's desperate to escape, why would she sit down and write that out? I'm getting frustrated just thinking about this book!

Follow my social networks for funny memes and odd news