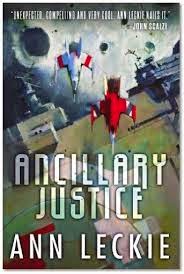 Here is Amazon's description of Ancillary Justice (2014) by Ann Leckie:

"On a remote, icy planet, the soldier known as Breq is drawing closer to completing her quest. Once, she was the Justice of Toren - a colossal starship with an artificial intelligence linking thousands of soldiers in the service of the Radch, the empire that conquered the galaxy. Now, an act of treachery has ripped it all away, leaving her with one fragile human body, unanswered questions, and a burning desire for vengeance."

I would never have chosen to read this book. From the genre (I read science-fiction now and again but rarely seek it out), to the description, to the book cover art, none of it piqued my interest. The cover reminded me of that Atari video game from my childhood. And I didn't even know where to start when it came to reading a story about a spaceship who is a person. But Ancillary Justice is the latest book for my local book club, and even though it wasn't my choice, I was looking forward to reading something new and out of my comfort zone. It also didn't hurt that Ancillary Justice was the winner of the Hugo, Nebula, British Science Fiction, Locus, and Arthur C. Clarke Awards.

I know a lot of people who really enjoyed this book, and the many awards it has won is a testament to the writing as well as the unique and original story. For me, it took me about fifty pages to get into the story, I loved the middle of it, and then I kind of lost interest in the end. I don't want to go into too much detail about the plot, primarily because I'd have to remember all the names of people and places and look up how to spell them. Also, if you're going to read it, it's nice to go into it without many expectations.

I guess you could look at this story as the many relationships the Justice of Toren [JoT], or Breq, has with various people in her world. There is Lieutenant Awn, the lower class, but accomplished and beloved officer JoT served in the past. There is the stuck-up, royal officer that Breq saves in a far off icy planet. She dislikes the officer and doesn't trust her, but feels compelled to help her. And then there is the ultimate ruler of the Radch, an incredibly powerful leader who JoT is bound to follow.

Leckie brings up a number of interesting issues through her story. There is class, warfare, love, and justice. The question of when to follow orders and if one small soldier can make a difference, and what would or should they give up to make that difference. I was worried that the whole ship is a person thing would be ridiculous but Leckie pretty much sold it to me. Halfway through the book, I believed and understood so clearly how JoT worked and assimilated information.

In addition, the Radche society does not distinguish gender, either physically or linguistically. In the book, all pronouns are she, whether male or female. This was both fascinating and frustrating to me. It was a sharp reminder how much I assume about characters based only on their gender. On the other hand, without knowing their gender, I had a hard time imagining the characters in my head. They always seemed like a shadowy, mystery figure, and it kept the story from feeling real. Also, I became very distracted by trying to figure out which characters were male and which were female, and trying to figure out how sexual relationships work when gender doesn't matter. I kept waiting for the book to explain itself more, and I was disappointed that it didn't.

And in the end, that was my problem with the book. I didn't understand enough about the ship, genderless people, and a divided leader to really feel invested in them. I was often frustrated because I didn't have the information that I wanted about the world. Although I appreciate that this is a well-written book, I had to push through to the end and it didn't grab me as much as I was hoping.
Posted by Book Blogger at 8:46 AM